Not Again by Sam Neer

My favorite part of Shakespeare and theatre, in general, is how it’s different every time. Every time a play is performed, it’s the first and last time it will ever be performed that way. This is unlike film which is delivered to the audience in the exact same way as it is delivered every time it’s delivered unless you have a copy of the slightly different directors cut (oh boy one other way). However, the differences between performances are way more minute than the differences between different productions of the same play.

My name is Sam Neer and I play Dogberry in this specific production of William Shakespeare's Much Ado About Nothing. Before my casting, I had viewed Kenneth Branagh’s film adaptation of the same play. As many of you may know, in his film, Dogberry is portrayed by the distinguished Michael Keaton. His performance of the character is phenomenal, unique, and had me laughing my head off despite me barely being able to understand a word he’s saying. As wonderful and bizarre as his performance was, I couldn’t emulate it, cause remember, the best part about theatre is the fact that it’s different every time. Being lead by my philosophy on acting, I started moving in a direction with the character that I felt was unique and only somewhat similar to his character. I was a-okay until just this evening.

It must’ve been at least half a decade since I’d seen Tim Burton’s Beetlejuice and my brother wanted to watch it, so we decided to sit down and see it again. For the few of you who don’t know, Beetlejuice stars the aforementioned Michael Keaton as Betelguese himself. About a third into the movie the Betelguese character is featured more and more. And as the movie went on I realized that this “unique” character I had been trying to play was Beetlejuice. They talked the same, moved the same, and acted the same. I realized that despite what I thought, blasted Michael Keaton had influenced me after all. In order to follow my theatre philosophies, I had to move the character in another direction. I’m very glad I watched Beetlejuice, because a) it’s incredible and I would recommend it to anyone who likes comedy and unique artistic movies, and b) it helped me to recognize that I was copying Michael Keaton’s stylings and I wasn’t being true to myself as an artist. 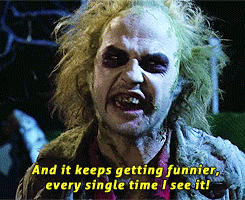 Let’s Do This! by Disha (Percy) Sandhu